Elizabeth Millicent Sutherland, Countess of Sutherland was born in London on 30 March 1921 and died there on 9th December 2019 aged 98. Like H.M. Queen Elizabeth who was almost an exact contemporary, at the time of her birth it was never contemplated that one day the Countess would become head of her family, Chief of Clan Sutherland and 24th holder of the Earldom of Sutherland, recognised by many as the premier earldom in the Peerage of Scotland dating from 1235. 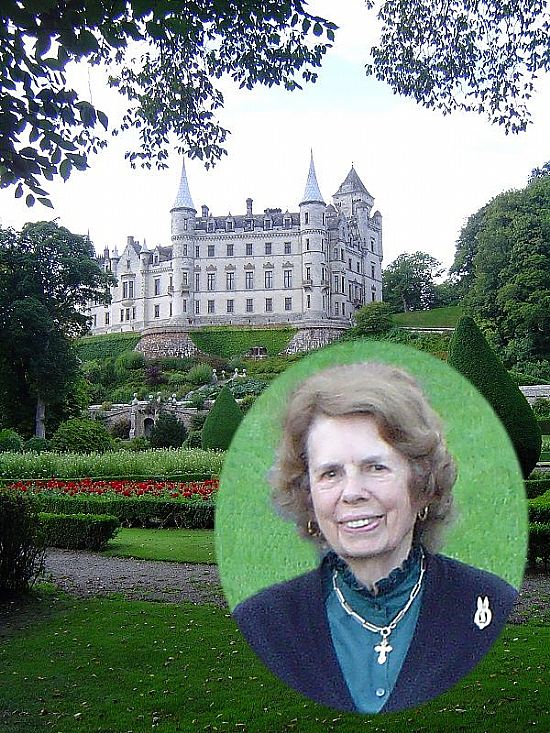 Photo credits:  Countess Elizabeth at the time of the AGM of CSSS on 6 August 2004; Dunrobin Castle on 6 September 2005. Both photos taken by Linda Gilmore.

As a young adult, Lady Sutherland experienced WWII and served her country first training as a Land Girl and then as a laboratory technician. Shortly after the end of the war on 5th January 1946 Lady Sutherland married journalist Major Charles Noel Janson (1917–2006). Their marriage was a very happy one lasting 60 years and produced four children, twin sons Alistair and Martin, daughter Annabel and youngest son Matthew.

The 5th Duke of Sutherland married twice but left no heir and therefore upon his death in 1963, Lady Sutherland succeeded in her own right as the Countess of Sutherland and Lady Strathnaver. These are the original Scottish titles held by her ancestors. The Dukedom of Sutherland created in 1833 and the other titles held by her late uncle the 5th Duke passed to a distant male cousin the Earl of Ellesmere, another descendant of the 1st Duke under the law of succession which applied to them. Lady Sutherland also inherited the land-holdings in Scotland associated with the Earldom, including Dunrobin Castle. On her marriage Lady Sutherland was known as Mrs Elizabeth Janson. In order to become Chief of Clan Sutherland she reverted to the original family surname Sutherland as did her immediate heir, her eldest son, Lord Strathnaver. Her other children retained their father’s surname, Janson, in accordance with the normal practice.

Lady Sutherland is survived by her three eldest children and their families to whom we extend our deepest sympathies. Her eldest son Alistair Sutherland, known since 1963 by his mother’s second title of Lord Strathnaver becomes the 25th Earl of Sutherland in succession to his mother. His only son Alexander Sutherland succeeds his father as Lord Strathnaver.