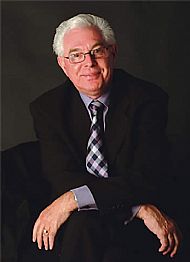 IAIN SUTHERLAND is a conductor of international status. He has received the prestigious Gold Badge Award of the British Academy of Songwriters, Composers and Authors, is a member of the Royal Society of Musicians of Great Britain (founded by Handel in 1738), an Emeritus Fellow of the Incorporated Society of Musicians and is a Companion of the Television and Radio Industries Club. On the passing of Dame Joan Sutherland, DBE, he was honoured to be invited by his clan chief, the Countess of Sutherland, to follow Dame Joan as Hon. Vice-President of Clan Sutherland.

Iain was born in Scotland and is a graduate of the Royal Conservatoire of Scotland (formerly the Royal Scottish Academy of Music and Drama). His principal instrument was the violin which he studied under Prof. Horace Fellowes, and later under Prof. Sacha Lasserson in London, leading to a highly successful career as an orchestral and studio session violinist playing with the great London symphony orchestras under the greatest conductors of the era such as Klemperer, Boult, Sargent, Solti, Kempe and Groves, and in the film and recording studios with legendary composers like Dimitri Tiomkin, and Malcolm Arnold, before receiving his own first conducting appointment with the BBC Scottish Radio Orchestra.

Prior to this, and after basic training, he served his national service as Leader of the orchestra of HM Band of the Grenadier Guards in the footsteps of soon to be famed violinists Hugh Bean and Ralph Holmes. Both he and Ralph Holmes were once put on a charge of “idle on parade” for playing Spohr violin duets after “lights out”, an anecdote he recounts among many in his witty after dinner talk, “My Life in Music; Music in my Life”. He is married to former fashion model, Barbara Williams and his varied interests include history, poetry and current affairs, good food, wine and conversation with amiable friends and colleagues and following the variable fortunes of Partick Thistle FC and Chelsea FC.

Maestro Iain has been a guest conductor of numerous well known orchestras of the world, including the London Symphony Orchestra, Philharmonia Orchestra and Royal Philharmonic Orchestra.  International soloists with whom Iain Sutherland has performed include:-  Nicola Benedetti, James Galway, Evelyn Glennie, Julian Lloyd-Webber and Tasmin Little.

His repertoire encompasses baroque, classical, romantic and contemporary works as well as the popular repertoire of Vienna, Hollywood, Broadway and International Light Music.  His numerous CDs include 'The Merrymakers - British Light Classics' and 'Great Scottish Classics'.